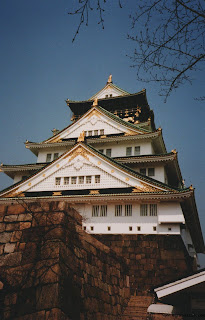 Osaka Castle, March 2000. When I visited it, the posters in the castle never mentioned that this is a reconstruction - it was first built in 1583 but it was largely destroyed during the civil war in the 1860s, was restored, but then heavily bombed because there was a weapons factory beside it on August 14, 1945.
Posted by Mark Bellis at 7:38 PM