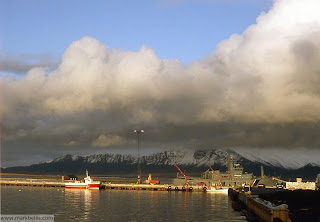 Harbour with Coast Guard ship, October 1992. I think this is the Óðinn, (Odin) , which took part in the Cod Wars against British trawlers. The Icelanders resented it being called a gunboat, as it only had a 57mm Hotchkiss gun at the time (very old!), replaced by a more modern 40mm Bofors when this photo was taken. 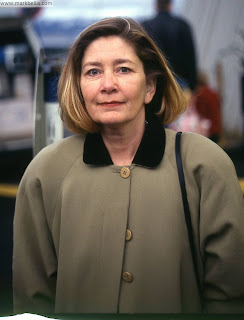 Kristín Jóhannesdóttir was one of two film directors I met in Iceland. She was promoting her film Svo á jörðu sem á himni (On Earth as in Heaven) at a booth in the Kolaportið flea market. Right next to a guy selling Hákarl (fermented shark). I think she might have been Miss World Iceland in 1972.
Posted by Mark Bellis at 12:57 PM No comments: