This one is earlier in April - my dog Punch has been moved up from where he was to the balcony by Adobe - I guess he wanted to catch the comet! The curved bright tail is dust reflecting sunlight, and the fainter straight one is charged particles being blown straight back by the solar wind and glowing with its own light like the aurora borealis. 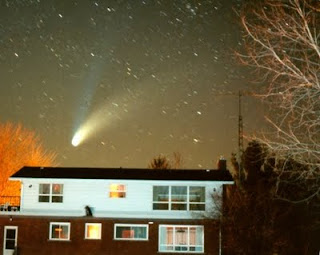 Posted by Mark Bellis at 5:19 PM No comments: