Kitchener, Oct 30, 1996 - A life size human skull, exquisitely carved from solid rock crystal, is either a 100,000 year old magic treasure from Atlantis with tremendous powers, or a recent work of art that an eccentric English adventurer tried to pass off as an ancient Maya "Skull of Doom". Either way, a near ninety Kitchener woman wants to use the skull, which attracts people, including famous movies stars, from around the world, to reintroduce Mayans to their culture.
"Peter O'Toole sat with it for four hours, over there on the carpet - he wanted to lie down" says Anna Mitchell-Hedges, 89, as she shows the photo of O'Toole towering over her to prove it. Shirley MacLaine and William Shatner also have visited to see the strange object sitting a few feet away from her knees that she calls "The Skull of Love" but her father, F.A. (Frederick Albert) Mitchell-Hedges, an adventurer and writer of travel books, called the "Skull of Doom" that could bring sudden death to those that mocked it. "That was one of my father's jokes" Anna says.

New Agers have adopted the skull as an icon, and Anna travels with it, allowing believers to meditate with it. "The skull seems to bring people together" saying that many friendships and romances have sprung from people meeting at sessions with the skull.
Anna, who was born in Ontario and adopted by Mitchell-Hedges, says she went with him as a young girl to British Honduras (now Belize) in South America, on an expedition to find traces of the legendary lost civilization of Atlantis, where she says she found the skull on her 17th birthday in a ruined Mayan city called Lubaantun in 1924.
She said the Mayans who still live nearby allowed the Mitchell-Hedges to take the skull back to England, because they believe that the local government would have confiscated it. She said the Mayans told her the skull was of one of the chief high priest of Atlantis and was thousands of years old. "It could be used to will death" she said, but not in the way her father meant, who she said made up the "Skull of Doom" moniker to scare off robbers. Anna said the Mayans told her the skull could be used to transfer the knowledge of an elder to a younger person, when the elder was ready to die.
Skeptics scoff at the Mitchell-Hedges claims. "It's clear that her father bought it off a collector" says Joe Nickell, a senior research fellow with the Committee for the Scientific Investigation of Claims of the Paranormal, near Buffalo, New York, who in his book Secrets of the Supernatural shows that the skull was in the possession of Sydney Burney, an English art dealer, ( it was even featured in a magazine article with Burney listed as the owner ) until it was sold to Mitchell-Hedges for 400 pounds sometime in 1944, according to a note in the British Museum. There is no written mention that can be found of either of  Mitchell-Hedges discovering or possessing the skull until F.A. Mitchell-Hedges published his autobiography in 1954, and Nickell says that no other member of the expedition to Lubaantun mention the skull, or even say Anna was there.
No certain idea was given for the skull origin or age. A similar skull in the British Museum was found earlier this year to have been made with modern tools.
None the less, Anna Mitchell-Hedges say that when she returned to Lubaantun in 1989 and 1996, many of the Mayans recognized her, and one, Leonardo Acal, named his son after her father. Acal wanted to come to Canada to tour with the skull in order to get support to start a school teaching Mayan language and traditions to natives and visitors.

October 15, 2014 - Here's a link to a story showing the skull was made with modern tools: http://archive.archaeology.org/online/features/mitchell_hedges/  and the National Geographic Channel did a reconstruction showing the skull has features more like a European woman than a Mesoamerican: http://natgeotv.com/uk/the-truth-behind/videos/crystal-skull
Posted by Mark Bellis at 8:29 PM No comments: 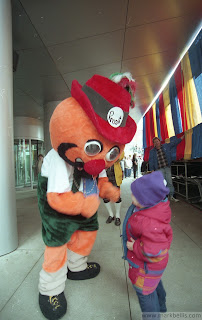 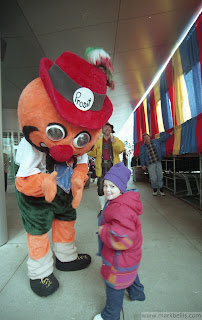 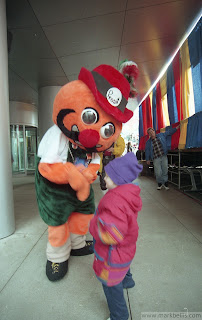 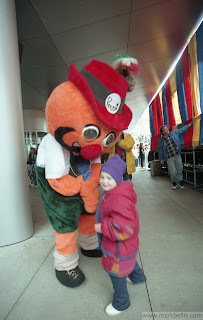 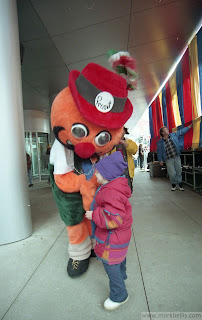 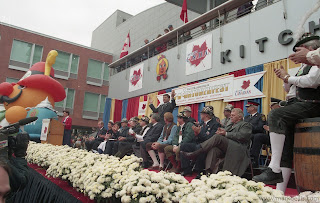 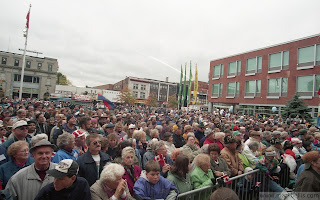 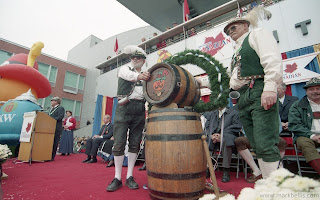 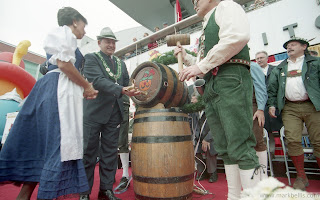 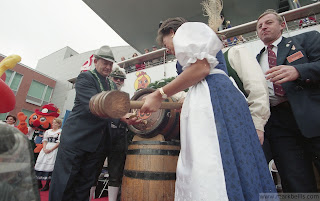 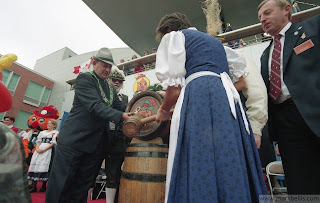 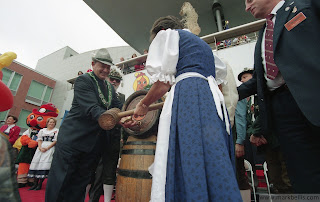 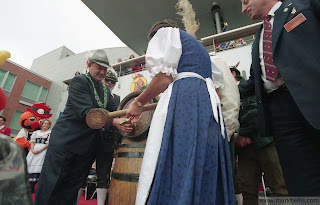 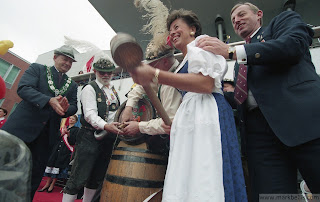 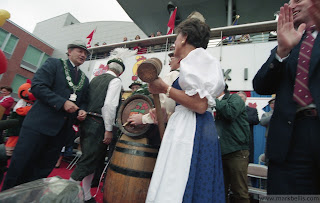 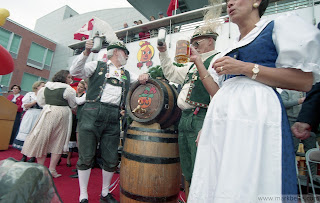 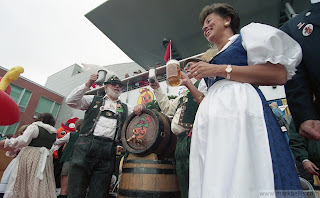 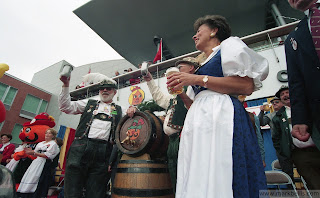 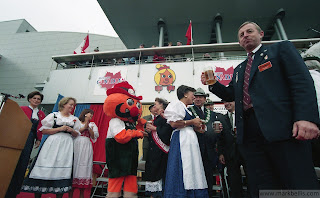 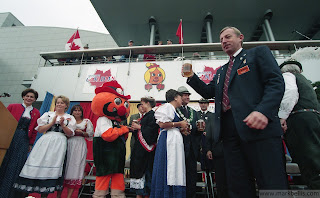 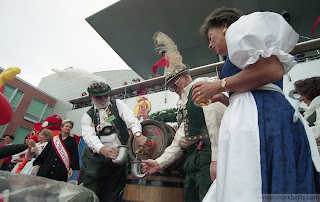 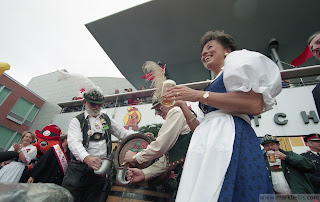 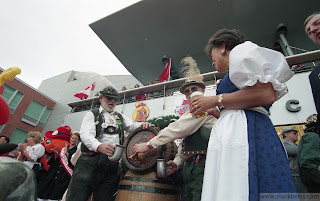 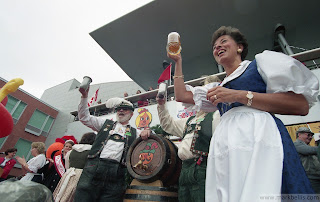 Note current CTV anchor Lisa LaFlamme in red jacket on far left. She was a reporter with the local CTV affiliate CKCO-TV.
Posted by Mark Bellis at 2:53 PM No comments:


Oct 8 - Saw Ray Davies in Toronto. A teenager in the teenager revolt of the sixties, now in his fifties. He was reading from his book and singing. Talking about his childhood in North London, being ripped off in the music trade, coming to America and being ripped off big time.

Oct. 18 - Kinko's gives me someone's else color photocopies by mistake. Then they give her my name, phone number, address and cellular. She calls me three times when I'm on the 401 to Toronto, and then doesn't leave detailed instructions on my machine as I told her to do to drop off the photocopies.

Oct 22 - Saw "Completely Unknown Authors" at the Rivoli. Many of then deservedly so. M.C. was creative writing professor at U of T who thought 'Amateur' was Greek for lover. Saw David Gilmour on the street on my way out. Felt cynical because he gave me fellow media grin, and he doesn't know me.

I think we should privatize the CBC.

Oct 27 - Back at the Rivoli, saw Sean Cullen from Corky and the Juice Pigs do Dame Sibylle Thorndike. Pretty funny really, but he should not be using something that sounds like a real person's name. My mother was an usher when Sybil Thorndike did "Medea" at her school. She was pretty old at the time, but mom said one performance really electrified her.

Oct 30 - Saw Mitchell-Hedges skull of doom - very impressive piece of art made of rock quartz of great quality - a sign could be read through it. Very good optical quality - it focus light very well. No doom was felt. Anna Mitchell-Hedges (89) served tea next to it, and said Peter O'Toole visited a few times and has meditated with it on the rug for three to four hours. He looked far weirder in the pic than he does in the movies....

Went to Toronto for Hallowe'en - fun drag queens on Church street which was blocked off. In honour of recent birth of Lourdes to pop star, a Madonna imitator had fetus trailing between his legs on an umbilical cord, which offended even hard-core leather fetishists. O tempora! O mores!

A Pro Dom had scleral shields to make it look like she had no pupils. She (he?) said she played a vampire in her work.

Nov 8 - Did assignment about man in Ingersoll who picks up trash that town charges a buck a bag to pick up for 50 cent. Went to dump with him. Whewww! Went to London. Truck smashed through car ahead of me. Body covered up on road, OPP officers chatting and smiling near by. ( We all get used to it ). Called in to see if photo wanted it. "Bellis has tarped body near London." They didn't.

Nov 9 - I get suprise assignment to cover Yates Cup University football match between Guelph and Waterloo. Not only haven't I been following the games, I don't know anything about football. What is a 'down' anyway? A unit of time? Fun to see cheerleaders for the first time in my life. Didn't know they still had them.

Nov 12 - Saw P.J O'Rourke at Thompson Hall. Geddy Lee, the singer from Rush, who was a neo-con back in the seventies before it was fashionable, ,was in the audience. O'Rourke did a long Q and A -- he was a little hung over from partying with Hunter S. Thompson til 4.30 in the morning in New York at a Fear and Loathing 25th Anniversary. O'Rourke was given a split of Johnny Walker Red Label at the signing afterwards and poured himself four fingers.

Nov 13 - Went to Woodstock for trial of freelance garbage collector. Put over til December. Found a copy of a satirical magazine published in Toronto in 1890 called GRIP. Cover story cartoon about Mercier buying votes with papal indulgences in Quebec, and cartoon about official billingualism in Northwest territories ( now Manitoba ) and force of French vote in Quebec.

Nov 17 - Took nephew to Sega Playdium in Missisauga by Square One shopping mall. The great wasteland of the end of the 20th century. Giant video arcade, with roller coaster that goes nowhere in front of wide Imax screen. Hydralic shocks give jolts and illusion of motion. Place gave me the creeps, loud noises, utterly dehumanized. Cronenberg should have set Crash there. Paradise for people who get off on simulated violence.

Nov 20 - I think there is a hidden indoctrination camp somewhere in the arctic where they force people to read Reader's Digest on the tundra for 18 hours a day so that they can be boring enough to host art shows on the CBC.

Nov 21 - Spoke with Clay Ruby, one of Canada's best criminal defense lawyer, about case involving suspected child molester - got him straight on the line - Ruby has one of the best speaking voices I've heard, wonderful projection - his client had been done for four counts involving a complainant who had alleged abuse when he was in the care of the client, a Children's Aid Society social worker. Ruby showed the accuser to have had a criminal record, involving blackmailing an ex-girlfriend by threatening to send nude pix of her to her fiance, and to be a 'pathological liar', and Ruby even got the crown to recomend acquital. Still, the CAS won't give him his job back.

Nov 22 - Nice night out. Walked into cafe, grabbed paper and walked to back where there was light. Tall, beautiful woman embraced me, said "I'm so glad you could come" and handed me a glass of wine. I had no idea who she was. It came back to me that I met a paint besplattered artist, and had sent her my card - she introduced me to three other gorgeous artists - went to performance in church basement afterwards. Five dollar admission, way better than anything I could see in Toronto.

Dec 22 - Pointless stakeout of suspect killer's house in hopes of getting interview with suspect's daughter, who was posing as suspect's wife in England and has two children. Paternity of which of great interest. Ex-wife rammed CKCO cameraman, scared crap out of my shooter by coming up behind him at night and shining highbeams into back of his car as she presumably took his number. Then she sent big weepy letter about how sorry she felt for us out there in the cold to our papers, although she has called the cops on us numerous times. Letter published in her local weekly, the editor of which agreed to act as spokeswoman for her!!!

Nice woman at FBI press office. Had Southern accent. Thought they'd take forever to get info on suspect, (like our police) but in less than 10 minutes - ring!! - "Hai, this is Ah-lice from the F B AI?"

Saw Ralph Benmergui in Toronto. Did not make fun of him.

Chatted with Alex Chin, owner of subtext, gay fashion shop on Queen. Nice fellow, not at all "You're from Scarborough, you can't wear our clothes" sort of attitude. He had very good drag queen, very tall black man, working in shop.

Garbage collector trial ends with injunction against him. Went to Stratford, found great club in basement across from town hall run by young guy Chris Rickett. Some oddball anarchist, doing Ken Kesey acid tests. I Videoed drunk who was hurling abuse at people after staggering in. Told girl to 'suck his dick'. Chris leaped over bar offering to do it himself - guy staggered out of bar, followed by 20 people - staggered down street, hurling abuse back, and was followed by police cruiser.

Dec 29 - Saw Corky and the Juice Pigs at the Rivoli again.