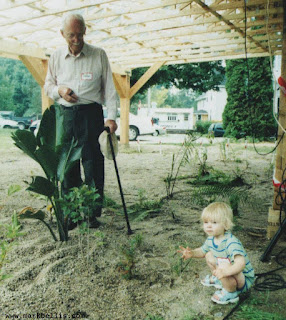 PORTLAND, August, 2004 -"I came to Canada, I saw all these beautiful natural
resources," the 90-year-old man said, leaning on his cane and gesturing
towards the sparkling lake. "I wanted to do something to protect them."
Retired University of Toronto professor Alfred Bernhart, described as a
"philosopher-engineer" by his son Bernie, takes pride in his latest
brainchild, a "waste water garden" that uses human waste to grow green
plants.
Bernhart has been working on the recycling of sewage since he was a
graduate student in his native Austria in the
1940s. He coined the word "evapo­transpiration" for the system. The
theory was refined by David Del Porto, a Boston-area engineer who has
designed hundreds of wastewater gardens in the United States, but this
is the first of its type in Canada.
The garden is at the Centre for Sustainable Watersheds in Portland,
south of Ottawa.
It stands a few feet from Big Rideau Lake, full of boaters travelling
the Rideau Canal, in the middle of cottage country. Reducing pollution
is the demonstration project's main goal.
It's an experiment aimed at three-season cottagers, said project manager
Michael Minthorn. But as large "monster homes" spread through the area,
it could be upgraded to all-year use, Minthorn explained.
In a conventional septic system, the "black water" - sewage water
carrying solids - goes into a concrete septic tank. The solids settle
and are filtered out. Then the "grey water," the sewage without solids,
leaches out through a field bed, a network of pipes buried in layers of
sand, gravel and rock. From there, the water eventually ends up in the
soil and groundwater, where it can carry e. coli bacteria, drugs and
hormones from human waste as well as pollutants such as heavy metals
into the environment.
In the waste water garden, however, the whole field bed sits in a layer
of plastic that leaves the grey water nowhere to go but up through the
plants, which filter and evaporate it.
Even organic material, which leaches out to groundwater and eventually
causes algae on ponds and lakes in regular septic systems, is used by
the plants to grow.
Del Porto uses vines such as wild grapes and Virginia creepers, because
they're "like long pipes" with roots that grow many feet in the ground
and suck up litres of water each day. The plants should be monitored to
see they are getting he right amount of water, but Del Porto said it
takes no more work than an average garden.
Because of the risk of e. coli and other
contamination, no food plants are used in the bed, but ornamentals such
as cedars and flowers work fine.
The project looks like a hydroponic garden - a field of sand about 18 by
30 feet, with plants poking out of them.
A translucent roof over the growing area sheds rainwater away from the
beds, since the plants are supposed to filter and evaporate the grey
water only.
The system, which has been built as a demonstration model to show
cottagers how it could work for them, now serves two cottage country
office buildings with about 27 users, looking after all the wastewater.
It doesn't need soil to absorb grey water, meaning it can be built on
land not suitable for an ordinary septic system. Although targeted at
cottages, it could be used year-round if an insulated greenhouse was
built for the plants.
Cost of the system could run from $15,000 to $25,000 for an average
household.
Eric Draper, of Portland, who built the system, said that it cost about
10 to 15 per cent more than regular septic systems.
There's no need to dig up and replace the field bed every 30 years
because the bed would not form an impermeable layer around the pipes as
conventional beds eventually do. The diffusion pipes can be flushed out
with a hose without digging them up.
Minthorn said that cottagers could avoid using a septic tank and having
to pump it out every three years by using composting toilets that hold
the solids for composting, producing grey water that would go out to the
garden.
The project was built with local municipal approval and conforms to the
Ontario Building Code, but anyone interested in using this system should
check with their local municipality before building.
For more information, visit www.watershed.ca.
Posted by Mark Bellis at 6:36 PM No comments: 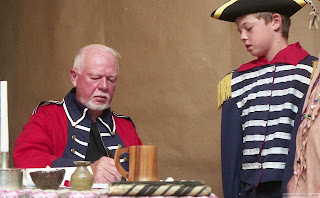 
Asked whether he'd want to pursue a career as a actor, he said "Not if I gotta say "Archeological" again!"
Posted by Mark Bellis at 6:25 PM No comments: