From 1994 - The TV reporter who broke the story was retiring, and had some fun with the story, and made it seem as if there was a rescue of the frogs and showed up with some little nets and got people, including himself, to pose looking in the bog for frogs to catch them to help them across the road. Ran as written in the Star, except they changed Splattin', which is how the man said it, to Splatting. I'm still miffed.

WATERLOO, JULY 26, 1994 - A plague of frogs of biblical proportions has turned a strech of quiet suburban road into a killing field for amphibians.

"I heard the tires splattin' over top of them - there were thousands of them." says Steve Humphries, describing the carnage on the road by a conservation area in the suburb of Erbsville in Waterloo.

Humphries, who owns a garage on the road, says he had to close his garage doors one night recently to stop the swarming frogs from jumping into his shop. Humphries says he is not frightened by the hopping hordes. "Not in the least. They're not coming to get us or anything."

The frogs have been leaping across Beaver Creek Road in record numbers. During peak times, residents say they see the road covered with frogs.

"It had just finished raining - I was driving home - there were thousands, just thousands of frogs" says Cheryl Hendrickson, graduate student in Environmental Studies at the University of Waterloo. She had noticed large numbers of frogs before on her drive home in the past few weeks, but says that on previous nights they "were easy to avoid" but that night about a week ago they were all over the road."I tried driving without my lights, but that didn't help - I heard the tires going over them. I stopped and got out to identify them. They were bouncing all around my feet - I noticed a big toad, but most of them were leopard frogs."

Hendrickson, who calls herself "The Frogwoman of Erbsville" after appearing on a local TV news broadcast expressing her concerns about the frogs well-being, says Larry Lamb, a professor in her department, believes the explosion in frog numbers is due to a long damp springs that allowed more frog tadpoles to reach maturity before their puddles dried up.

The road is by Laurel Creek Conservation area. Rod Deacon, a community relations officers with the conservation authority that administers the area says, while frog migrations do occur "It's never happened before in the numbers I've seen." Deacon has advised motorists to avoid using the road during heavy frog transit. Other countries, he says, have found frog-saving solutions for this problem "In England, they have tunnels built under the road for annual migrations."

Posted by Mark Bellis at 7:38 PM No comments: 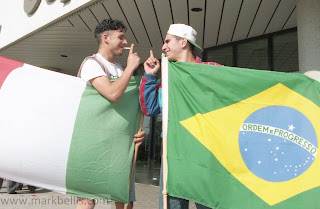 In Hamilton there are a lot of Italians, some Brazilians but mostly Portuguese who were pulling for Brazil in the World Cup - they met on the streets - nearly everything was very fun. 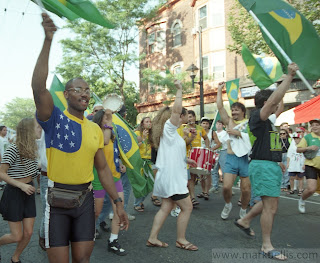 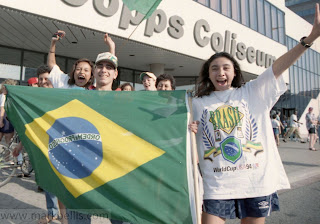 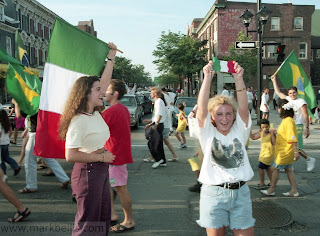 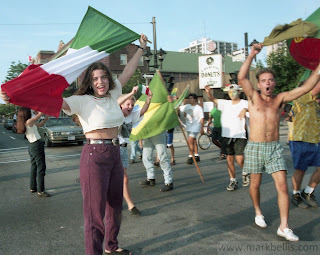 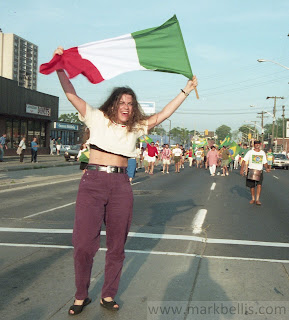 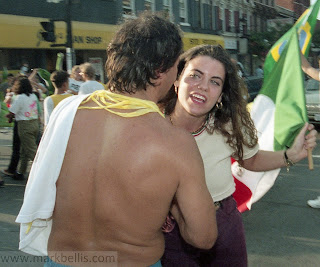 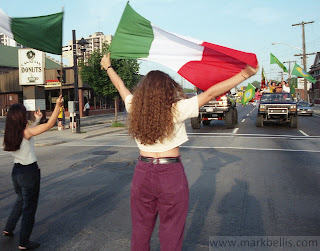 She didn't flip off Brazil, but her friend did 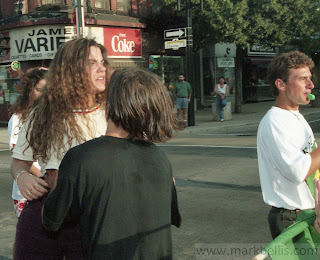 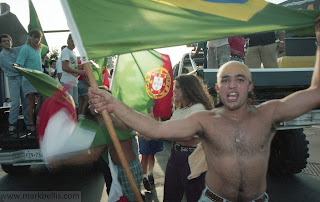 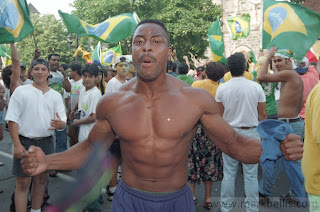 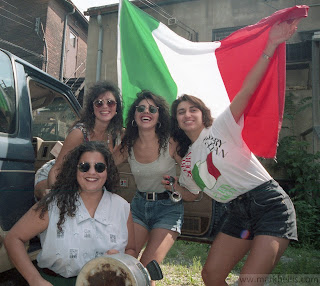 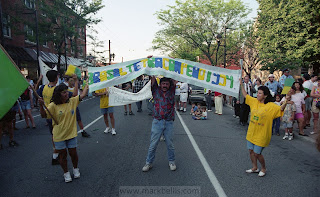 SHEILA COPPS SHOWS OFF HER MUSSELS


copyright 1999 Mark Bellis
Sheila Copps, despite being batty, is a very good politician from a political dynasty in Hamilton, a big industrial town near Toronto on Lake Ontario. The Star did not run the part about the ax or holding her head underwater, despite my appeal.
Hamilton, July 16, 1994 - The Deputy Prime Minister donned snorkel and fins and plunged into the filthy waters of Hamilton Harbour to pick up trash as part of a clean-up program sponsored by local scuba clubs.
"They wanted me to swim in Burlington." said Deputy Prime Minister Copps, who is also Minister of the Environment, as she bobbed up clutching a zebra mussel encrusted can, the only thing she could
find in the murky brown water on the end of Pier 4 in Hamilton. Burlington had clearer water but is outside of Copps' riding in East Hamilton. "I'd have gotten in shit if I dove out there - looks like I'm in shit now!" she said refering to the brownish water swirling around her. Copps later used the mussel-clad can to illustrate the problems caused to the environment by the Zebra mussel invasion. "Twenty years ago they weren't in Lake Ontario." Copps is not a certified diver, but took a crash course to familiarize herself with the equipment, and was accompanied by Doug Brignall, an experieced instructor. She remained submerged for about 10 minutes, combing the bottom in water with only a few feet of visibility.
Copps "wanted to make a statement about what we can do" to clean up the environment, she said before the dive. As she was swimming out, Ms. Copps looked back and noticed that the event was being picketed "Protestors! If you don't do anything with you life, no one will criticize you." she said. Copps was quoted earlier as saying she would like to swim in Hamilton Harbour because her mother once swam there.
Copps told some children she was swimming with after her dive that she would have brought her daughter but her mother Geraldine did not want her photographed by the media. She then played some games with the children, including one to see who could hold their head underwater the longest, which Copps won, and later told them an anecdote about splitting her own head open with an axe when she was a child in an effort to escape from a garage in which she had been confined by her sister. [I AM NOT MAKING THIS UP - BELLIS].


Note added in 1999 Copps' got the kids to sit around in shallow water in a circle near the beach and then got them to duck their head in the dank water, saying she always won at this when she was young. One little girl in front of me went into a dead man's float after about 30 seconds, and with the biggest headlines of my journalistic career - "DEPUTY PRIME MINISTER DROWNS TOT IN FRONT OF CAMERAS" - dissolving in my mind I pulled her head back up. She was fine. The clean-up dive was sponsored by the Ontario Underwater Council, an association of scuba clubs, and involved hundreds of divers from across Ontario collecting underwater trash around Hamilton.
Copyright 1994, 1996, 2009 Mark Bellis
Posted by Mark Bellis at 5:19 PM No comments: