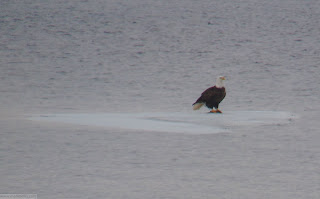 Bald Eagle on ice floe, seems to be eating something, muskrat?
Posted by Mark Bellis at 10:29 AM No comments:

Posted by Mark Bellis at 4:09 PM No comments:

I met someone who said he appeared onstage with her during World War I. She was the Goddess of Victory and there were four soldiers, English, American, French and the Canadian, who I met, who carried her out on their shoulders on a chaise sedan.  He said she had a really clear voice even at her age, and when they were going on stage the Frenchman said to him "Tu sais mon vieux, elle a une jambe de bois - tu peux me croire - je l'ai senti!" - "You know, old man, she's got a wooden leg - you can believe me, I've felt it!"
He'd told me a few other stories, which I can't verify - He said he worked as a dresser on the 1926 production of Mae West's Sex. He said they just left an empty stage with the lights on for a few minutes when the couple left the stage to go have sex, so the audience would imagine it, rather than going straight to intermission.

Posted by Mark Bellis at 4:54 PM No comments: