I put this up on hearing of Jim Carroll's passing - will make the links work later Sept 14, 2009


Mar 20 - Someone conned CKCO TV into letting him on their noon-hour show to show them how eggs can be balanced on their ends on the equinox. CKCO still doesn't realize that you can do this any day of the year.

Mar 31 - Hale-Bopp! So big and beautiful - it is very depressing to think of those 39 people in California killing themselves over it I looked at it today from the observatory at the University - thru the 10 inch telescope you can see that the head is just a point - they said it was further away than the sun.

April - did something I can't quite disclose researching a story in an American state with lots of pretty mountains. Saw Herb Gray (Solicitor General of Canada) who has had cancer - at a conference in Cornwall - He was recovering well but was very "fuzzy" at times - he probably is on lots of painkillers. Took lots of pictures of Hale-Bopp.

May 7 - getting bankruptcy docs on Walker - went to strip club in London that featured real tiger -(ONLY REASON I WENT, OK !!!! ) missed tiger act, but chatted with assistant and he led me back to the VIP lounge ( if you don't know what this is in a strip club, you don't want to know ) which was so black I could barely see the tiger's owner - after I shook hands and talked for a while with him, I asked him if it was possible to see the tiger - he said it was and nodded to the 450 pound ( 200 kg ) tiger at my feet. Huge eyes that reflected green from the back that looked intently at the dancers getting up close and personal with customers in the gloom. He got me to kneel down beside it and put my face forward, whereupon she rubbed her face against mine like a cat - came back later 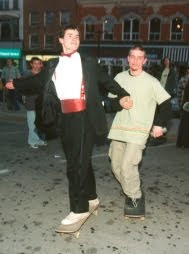 Chris and Dan, protesting anti-skateboard by-law by skateboarding in Stratford

Weapons seized and native constable's van stolen from his home and burned - hostility from people on rez when I tried to get reacts.

June 15 - Quarrelled with Janet over whether reiki and other 'alternative' medicine works.... she had hurt her foot and I spent the day hanging up laundry.

June 20 - Jim Carroll, Richard Hell, saw them at Opera house- Hell gigled as I got him to write 'reiki didn't work for me' on post card for Janet. Carroll amazingly good. read poem about sort man going blind looking at Velasquez pictures

Summertime and the living is.....
Posted by Mark Bellis at 5:01 PM No comments: