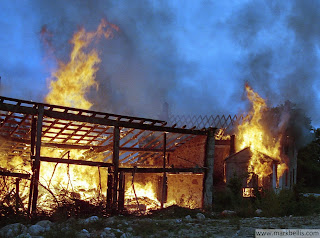 This appeared in Icelandic in Morgunblaðið in 1993

Guelph, Sept 1, 1993 - An environmental activist who admits to deliberately sinking ships in defence of endangered species is trying to buy a used Russian submarine.

"It will give us more of a dramatic flair", says Paul Watson, president of the Sea Shepherd Conservation Group, speaking this Monday from his headquarters in Santa Monica, California, who admits that the sub might be used to ram boats in violation of international treaties on fishing and whaling. "You could use it for that (the sub for ramming) - it's got a 2 inch hull. Or we could put it into a harbor and send out scuba divers through the torpedo tubes to sabotage boats and stay under water the whole time."

Watson plans to visit the Black Sea port of Odessa this September to view a Foxtrot class diesel sub built in 1960 for the Soviet navy. "We could have gotten a nuclear one - " but "we're opposed to nuclear power. I think we could have even got the torpedoes and deck guns if we wanted them."

Watson describes the sub as an attack submarine, 300 ft long and weighing 1950 tons, with an operating range of 1600 nautical miles.

"We're incorporating all the myths - [referring to a Beatles' song and "20,000 Leagues under the Sea" by Jules Verne] we're going to paint it yellow and call it the Nautillus." Who's going to be Captain Nemo? "I guess I am." Asking price is around $ 400,000 Canadian.

Watson says the Sea Shepherd has about 400 members who are sailors "some who are experienced submariners, and we are getting calls from other volunteers with experience". On hearing that the first officer of the U-boat U-534, recently recovered off the coast of Sweden, was still alive and in good health in Canada, he asked jokingly "does he need a job?"

Watson was arrested on July the 24th by the Royal Canadian Mounted Police off the coast of Newfoundland after colliding with a Cuban trawler fishing for cod in international waters. He was charged with mischief and released on bail. Newfoundland fishermen have come to Watson's defence, since cod fishing has been banned for at least a one year period in Newfoundland because of cod stock depletion. The Canadian federal government extended the ban to cover almost all of Atlantic Canada this Tuesday. He has offered his flagship, the S.S. Cleveland Amory, to the fishermen of Newfoundland to prevent fishing of Northern Cod, an endangered sub-species of cod, by foreign trawlers off the Grand Banks. "We're doing what the Canadian Navy should be doing." says Watson.

Watson had been regarded with hostility by fishermen in Newfoundland in the Seventies when his group tried to stop seal hunting, which Newfoundlanders traditionlly practiced to supplement their incomes during the early spring.

The Cleveland Amory is a converted icebreaker painted black that Watson describes as being well suited for ramming boats. The ship's forecastle has a tally of the names of ships, and the flags of their home countries, sunk by the Sea Shepherd Organization, including two Icelandic flags to commemorate the two whaling vessels sunk in 1986. "We sunk half their whaling fleet. I admitted that I had sunk the boats when I arrived in Iceland in January of 1988 and ask them to arrest me. They refused to charge me and deported me the next day." He goes on to explain that he received a fax from George Blitchfield, the president of the High North Alliance, a whaler's association headquatered in Norway that contained a statement made by the Icelandic Ministry of Justice that stated he did not identify himself as Paul Watson when he was deported from Iceland. "I deny that - I did identify myself."

Watson says "We're not a protest group - we're a surveillance and enforcement group." and maintains that they are only enforcing international treaties and the United Nations' World Charter on Nature. "We never get charged under international law (for their actions on the high seas) because our opponents would have to admit that they were in violation of international law."

Watson says that they will "watch Iceland if they start killing whales" but would not interfere with cod fishing in Icelandic waters. "If Iceland wipes out its cod, it's Iceland's decision."

Watson responded to a letter published in a Vancouver newspaper from a Canadian naval officer that said Watson was building a "Monty Python" navy by saying "Well, we've sunk more tonnage since World War II than the Canadian Navy!"

Posted by Mark Bellis at 7:19 PM No comments: