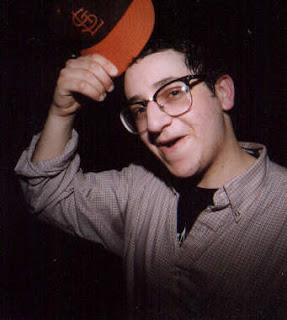 Click on pic to go to www.atomandhispackage.com
May 17 - Saw Indian music.... Sitar, Tablas and that droney thing.... mostly Bengalis... thing seemed to be organized by German woman in Sari...... "Thank you all for coming because if you didn't we would not be able to have this event." It got a laugh, which gave the lady pause as she was completely serious.
News reports - school and bus stop....
July 1, Canada Day I stopped to watch the fireworks from my car. An Old Old Woman watch TV in the house in front of me. Fireworks going off behind her, band playing string of pearls. After a few minutes she hobbles out, having heard them.....
July 3 - The neighbour has a cut out wooden figure of a little boy with a painted yellow wire coming from the crotch which indicates a stream of urine, I believe. May go to BC....
July 9 Little sunfish, in the shallows, standing guard over a pile of rocks, perhaps it had built it for eggs? It would bite at my hand when I put it near....
July 10 - Sat next to Gino Empry at theatre...... yes, even more unpleasant than Frank magazine makes him out to be..... promoter of events and people, little man, in 50s, with ring that looks like a 1 oz ingot of gold and more gold everywhere topped by artificial hair......saw Greg MacDonald from Loogie at a restaurant where he's the Maitre d'... everyone's underemployed.....went to see the Rusty Nails again...... beautiful peppermint pattie sort of girl bumped into me, looked at me...... achhh, couldn't think of anything to say... ran into two women I did know from 5 year ago..... old.tired, like myself and drunker....they weren't interested in me... Later - worked! Gay Pride thing in London - oddball protester in London blonde guy who looked just like a Tom of Finland character wearing a Blue (hmmmmm.... one of Ernst Zundel's (Noted producer of holocaust denial material in Toronto) boys??) helmet and tight t-shirt. Lubby, the pint-sized revolutionary and part-time wigger is there and ragging on the anti-gays while he films them - later he tells me some of them were supposed to have been Zundel fans too.
Sat in Liquor store parking lot to write story. Guy comes up to me. Wants to know where the nearest gas station is. I tell him. "I've been there, won't give me a gas can. Got my wife and kids with me. Come down from Sudbury. Walked to 5 gas stations." I'm about to give him my gas can when he want money..... I come back to the parking lot later and see him sitting with his wife and kids, which all seem to be adult male alcoholics." I see 'Run, Lola, Run" a German film. Near Hwy 7 in subdivision with Chinese 'massage parlours' tucked away in strip mall. Three or four of them...Chicago -railway platforms people all black then all white..... reminds me of a navy frigate I saw entering the Eisenhower locks back from the Gulf with the latest model guns on it and white sailors sitting on one side, black sailors on the other, white officers at one end and the only black officer standing by himself......vodka in a plastic water bottle walking through the graveyard..... 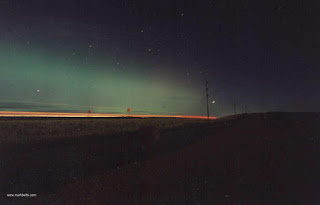 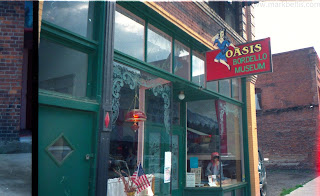 Wallace, Idaho has The Oasis Bordello Museum, which was a brothel that was in use up to 1988. Brothels were always illegal in Idaho but tolerated in many communities, especially in the northern part where there were a lot of mining towns - this was on the main street, so everyone in town would have known it was there. 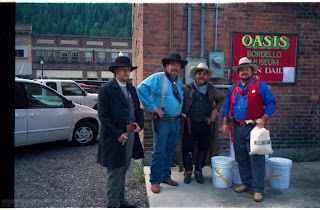 Harleys begin to appear in great number after crossing the Mississippi into Minnesota.......(2018 - Sturgis Motorcycle Rally in North Dakota - passed it looking at hundreds of thousands of Harleys lined up) I start eating those little ma huang pills that truckers take.......in S. Dakota town with Corn Palace.....looking at teen agers driving around in pick ups - the ones in fron gesture at a black kid walking down the street in a daze- I ignore thinking they're annoying the town negro....one looks at me, points at his eyes and points at him.... looking over I see he's pissing on the wall....somewhere further on in Livingston find a cafe, next to a museum, something making skeletons of dinosaurs, sabre-toothed beavers (no joke) ..... Seattle..Tacoma.. Fort Lewis looks like a dreary place to grow up....Tillamook Naval Air Base - old blimp hangar - gigantic structure - filled with old planes -- see sand dunes, grey whales, sea lions giant redwoods......back through whore ridden Vancouver, the old whorehouses of Idaho...one now a museum ...great lakes, an old old man who collected strangely shaped stones pressed from clay. 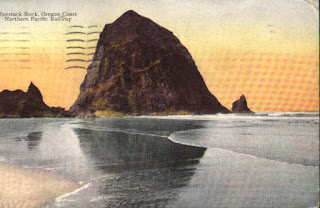 We cycled past this rock in Oregon - I found this card on a rack in Duluth, Minnesota on my way back. It's from a 1917 postcard addressed to a man in an infantry company at a fort in Iowa. 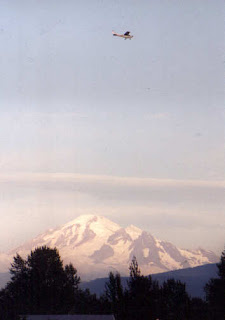 Mount Baker, south of Vancouver
Sept 1999 - Saw The Blair Witch Project (scared bejesus out of me even though dark woods hold no terror - and dammit, those weren't deep woods, they were old farms and pine plantations) only evil is man. Went for walk in Elora gorge next day and thought of piling limestone rocks into little piles similar to movie, was contemplating this and grinning to myself when woman walked by me to go into river and take pictures of the rocks. We had dinner later. THEN I stopped at a plaza for pizza and when I came out I saw a man that looked familiar - I believe it was Mr S. who had set up a Chinese restaurant in that plaza around 1991. His wife had disappeared and he said she had gone back to China but no one has seen her since and he was seen with a domestic dispute sized suitcase and a shovel and he called a friend to help get his car out of a country laneway in the dark woods he did not have any good reason to be in one night -- he was charged with murder, but with no body, fou nd innocent...... he looked changed somehow, more like a shambling beast.....what would make him want to come back?
September - Punch had stroke.. mother saying to him in gentle voice we all have to die sometime... He got better.
Big double rainbow Sept 29 - Handled weapon grade Plutonium..... Russia and USA want to ship the stuff to Chalk River for a test to see if they can use the material from old bombs they've dismantled under arms treaties....little microdot sample - the man said you could just walk into the facility in Moscow where they store 50 tonnes of the stuff after passing one man who didn't even check their passes....
Funny trip to an antique mart in Cambridge - top floor of an old factory - errgghhh lots of racist Black Sambo memoribilia - also there was a tree trunk carved into the virgin and child by a Spaniard living in Hamilton who'd died intestate - M. Girona - he'd also carved the fence posts of his home, the man who'd bought it - he said the government appointed executors had destroyed the posts. At the mall I saw a young man who was disguised rather well as an old man. A church was doing a human scavenger hunt and he was hiding in plain sight..... Nov 5 - Saw Ken Wiwa, Ken Saro-Wiwa's son - he said that Nelson Mandela had house built in shape of prison he was in South Africa - he thought it might be that great men like Saro-Wiwa and Mandela sometimes have great lives because they can't face home.
Posted by Mark Bellis at 10:00 AM No comments: