copyright 1999, 2015 - Mark Bellis
BOSTON, FEB 1, 1999 - Two Ontario inventors have developed a device that may stop deadly skids before they start.
In 1983, high school chemistry teacher Don Giles was riding in a semi truck driven by his brother's-in-law which was carrying with 15 tons of lumber to a mill in Pennsylvania when it hit a patch of ice and began fishtailing on the curve of a mountain road. "It was only 10 or 15 seconds before he got it under control but it seemed like forever." says Giles, now retired after 32 years of teaching. Giles wrote down in his journal that day, Christmas Eve, that there had to be a way to detect black ice before a vehicle started skidding.
He started working on ideas in earnest after three of his friends all died on the same winter morning in 1994 in separate auto accidents caused by black ice. He developed an idea with a former student, David Kemp, now an electronic engineering graduate working for a software company in Simcoe. The two started improvising a device that uses infrared beams to detect black ice, oil slicks or water over 1/8 of an inch deep, which they say is the depth where a car's tires can hydroplane, sending the car into a skid. The device, called the Black Ice Sentinel, is mounted facing downwards on the chassis and shines an invisible beam onto the road, which reflects back when it strikes a smooth, shiny surface. The inventors admit it will give 'false positive' alerts when it crosses things like railway tracks, expansion joints and sometimes even white lines.
Much of the work was done in Giles' crowded workshop in back of his home, which Giles designed himself, in Boston, near Simcoe. Giles made the lenses for the detectors by melting bits of clear Lexan rods that Kemp's wife used to build wedding cakes, into a mold lined with Pam, an aerosol cooking oil substitute, and Giles made the photoresists for the electronic boards in his own darkroom. The inventors also built their own calibration system, a turntable the size of a family pizza divided into six sections, paved with different types of asphalt and cement, that can be chilled and covered in ice or water to simulate different road conditions.
Four of the prototypes are mounted on the bumper of Giles' 1990 Toyota Camry for road tests.
The inventors have it set up to light up a bright green light when the outside temperature is below zero, a yellow light when the car passes over a shiny patch at above zero temperatures and red when it passes over shiny patches below zero.
Giles says that black ice often forms on "Nice spring and fall mornings - it's basically frozen dew." and that people go into skids before they are even aware of the road being slippery.
He said he was driving one morning with the air temperature at 40 F when the detector light up and he slowed down, with other cars "flying by me", but says on his return journey he counted three cars that had slipped off the road due to black ice.
Conversely, he says the device can detect when a surface is not slippery - he says he came to a hill that had been covered with frozen rain and he thought the hill would be too slippery to get up, but found that the detector wasn't going off, and that he could climb the hill easily. He said the frozen rain had formed a rough surface that his tires had no trouble gripping. "I just accelerated up the hill" he said.
The device can detect ice through a thin layer of snow, and the sentinel began going off as soon as he left the garage on a test drive, since his driveway was so slippery under a new coat of fallen snow it was tricky to walk down.
The inventors say getting to the prototype stage cost $ 23,000, $ 18,000 of which was spent on getting the US patent, and the Canadian patent is still pending. Kemp says doing the patent search is far easier now that recent US patents are available online.
White Line Distributors, which supplies Truck parts, will be fitting out the test prototypes on some of its customer trucks. The inventors say they have a temporary distribution deal worked out with the company, but are still looking for distributors for the auto, bus and emergency vehicle industry. Interested parties should call 519-443-8068 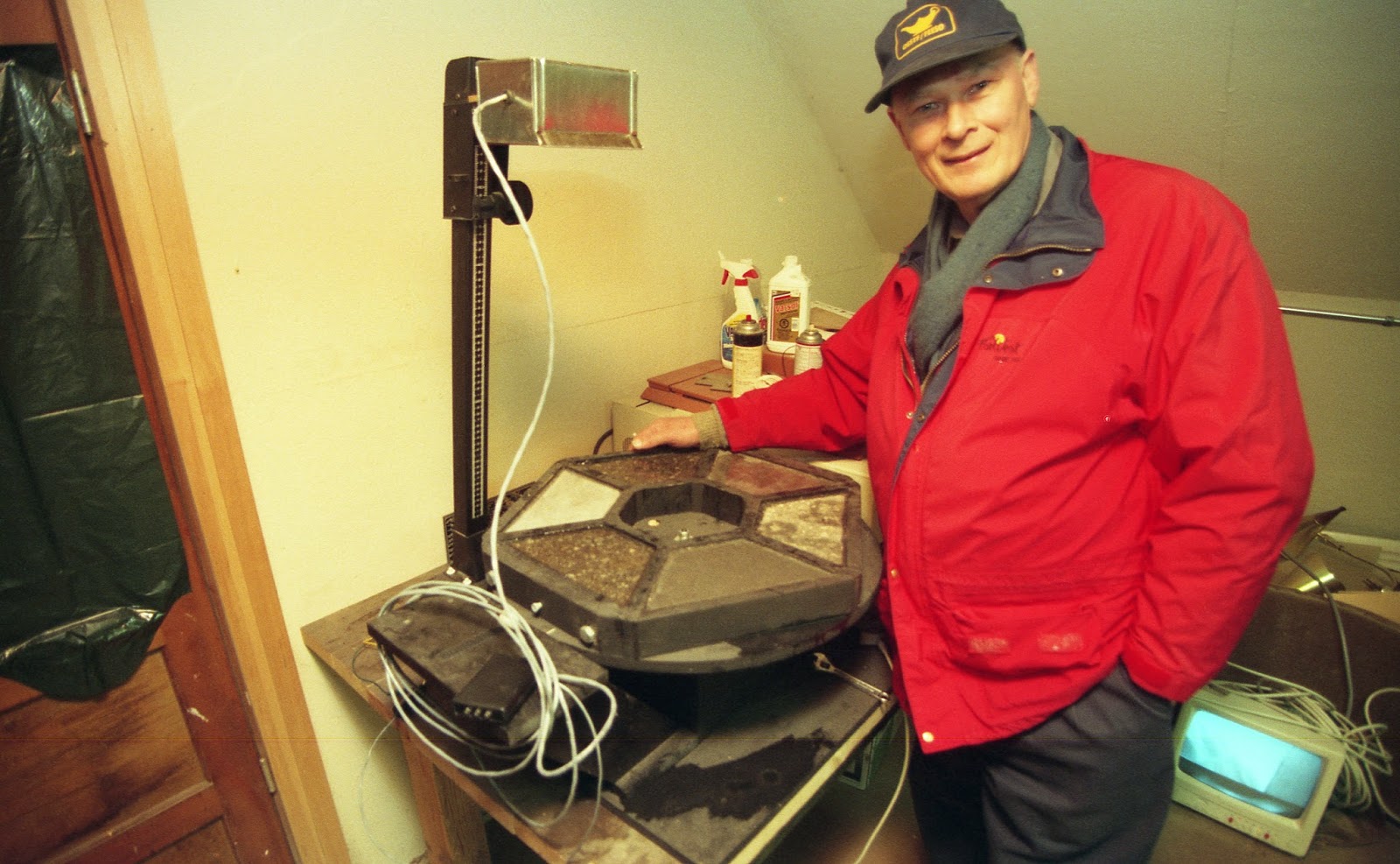 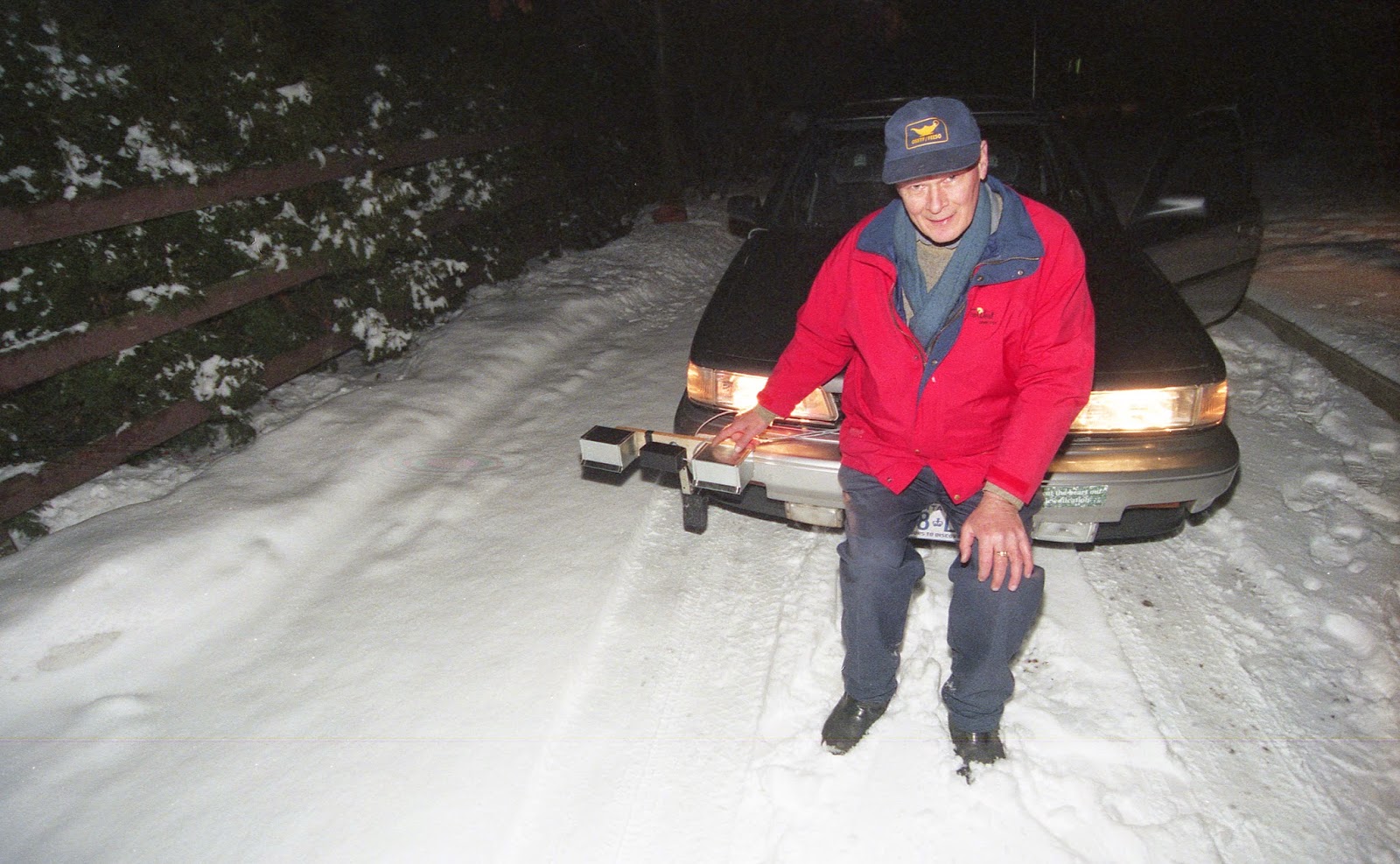 Prototype mounted on bumper
Posted by Mark Bellis at 6:27 PM No comments: