Dogs in Back Window of Car

Dogs in the parking lot of Walmart.
Posted by Mark Bellis at 12:44 PM No comments:

Email ThisBlogThis!Share to TwitterShare to FacebookShare to Pinterest
Labels: back window, dogs

During yesterday's visit to Ottawa, President Obama didn't meet the general public at all, except when he jumped out of his car to shop and get cookies - there were only American reporters that were in his press pool with him, which means that the Prime Minister's Office didn't know it was going to happen - where Obama stopped is a few blocks away from the US Embassy in Ottawa, so they must have told him where to stop and shop. Prime Minister Harper and the new Conservative Party have had strong connections with American conservative groups. The official part of Obama's visit had the lowest visual presence of any major head of state visit I've seen - the people who had stood for hours on Parliament Hill only saw him waving for an instant behind bullet proof glass.
Posted by Mark Bellis at 9:00 PM No comments:

It's about time somebody did that!

(image via Happy Famous Artists)
Hirst did the jewel encrusted skull called "For the Love of God" which it was claimed sold for 50 million pounds to undisclosed buyers (I'm doubtful - I haven't seen any proof that much was paid, and you'd need a forklift to deliver that much in cash) - this sculpture by Eugenio Merino sold for a more reasonable $41,290, and as Hirst threatened to sue a 16 year old, who was ordered to fork over his 200 pound profit by a British copyright group, for selling some derivative artwork, I couldn't think of a nicer guy for the subject of satire.
Here's Merino's Website.
I've just joined his fanclub!
Update September 5 - and the kid has been charged for stealing a box of pencils from Hirst, who claimed that since the pencils were part of a display they were worth half a million pounds.
A desktop sized version of this sculpture would make a swell action figure....Morally Bankrupt Man?
Posted by Mark Bellis at 8:15 PM No comments: 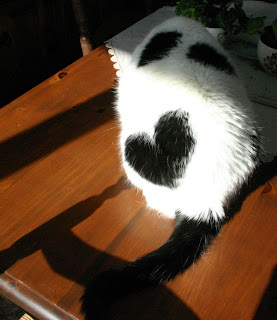 Posted by Mark Bellis at 1:04 PM No comments: 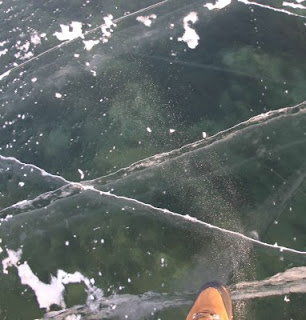 The ice formed before much snow fell - it is very clear this year!
Posted by Mark Bellis at 10:35 PM No comments: