No, that's not a Nazi era mandatory "Health Pass" 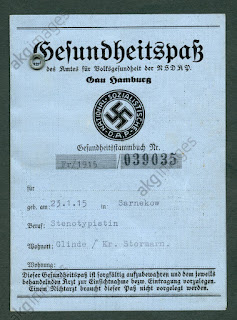 Image source AKG Images
This has been promoted by antivaxxers as a Nazi era "Health Pass" that Germans had to have to get into places like shops, and has compared to proof of vaccination that were required for admission to some places during the height of the COVID-19 epidemic. It really is a card for members of the Nazi Party (clearly written around the swastika and on the second line as N.S.D.A.P.) that let them access their party's health program (even health spas) - all the examples I found didn't even have anything that showed the bearer had been vaccinated. Carrying the card wasn't mandatory for anybody, and it is really a log book that showed visits the bearer made to medical facilities. The word 'Gesundheitspass' can be used for things like books for diabetics to monitor their own health or even for taking care of pet rabbits. The Nazi Party's Das Hauptamt für Volksgesundheit (Main Office  for Public Health) ran it, and the office did have a much more sinister function of 'racial hygiene' - purifying the party of members that had Jewish or other 'non-Aryan' ancestry, but this was done with other documentation than this card.
'Gau Hamburg' was from a Nazi revival of an archaic word used to divide the Nazi Party in Germany into administrative districts. Each Gau was lead by a Nazi party 'Gauleiter'.
References:
(In English)
Haaretz - Another Republican Member of Congress Compares COVID Restrictions to Nazi Germany
(In German)
Stol.it - How historical facts are manipulated for propaganda purposes
https://www-vol-at.translate.goog/faktencheck-darum-ist-der-covid-impfpass-nicht-mit-ns-paessen-vergleichbar/7206599?_x_tr_sl=de&_x_tr_tl=en&_x_tr_hl=en&_x_tr_pto=wapp
(In Spanish)
https://factual.afp.com/http%253A%252F%252Fdoc.afp.com%252F9U78YN-1?fbclid=IwAR2DD2KfVvQaoNEdPnoCh3fHq9Ly1xcbF3OslulWr0cS15HvtrOoaXIo6JM
https://chequeado.com/verificacionfb/no-son-comparables-el-pasaporte-de-salud-de-la-alemania-nazi-con-el-pase-sanitario-por-coronavirus-en-la-argentina/
Posted by Mark Bellis at 1:41 PM