I saw the The 7 Faces of Dr. Lao there in about 1976 as part of a festival. It had stopped showing films on a regular basis in 1959 according to Earl McRae. Interesting history - there was a 'miracle' foot doctor living there in the early part of the 20th century who drew large numbers of people to the small town of Williamsburg, Ontario. A wounded World War I vet decided to open a cinema and named it after Picadilly Circus, which was near the hospital he stayed at in London. Sadly, the sign is falling apart but the owner has declined to sell it. Keith Stata, who collects movie memorabilia at his Highlander Cinemas, told me he's tried to buy it. 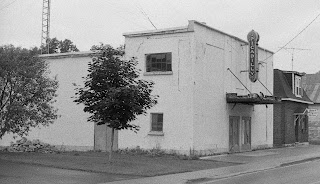 NCPR did a feature on  Mahlon Locke, the foot doctor who brought thousands of patients to the small town. Photos from the Cornwall Community Museum show he would sit at the convergence of several lines of  patients outdoors, sitting in a swivel chair, turning to each new patient, and manipulating their aching feet. Amy Feiereisel: The story of Doctor Mahlon Locke, the 'toe twister'