Some scenes of ice being cut on the Grand River in Elora, Ontario, for the 1994 film 'Trapped in Paradise'. The production company left the ice stacked up but removed it before spring floods as there was concern that properties along the river downstream would be damaged - I never heard anyone think that the Tooth of Time, the large rock on the falls, would be damaged! It is reinforced by concrete and not directly in the path of the ice, but the West Montrose "Kissing Bridge", the only covered bridge in Ontario, is made of wood and could easily have been damaged by ice if the water level was high enough. 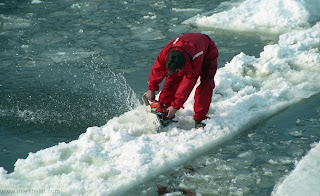 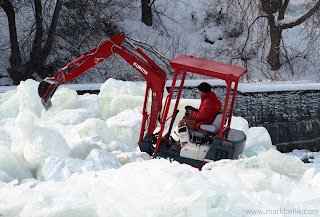