The UFO Resto was a landmark on Highway 20 between Montreal and Quebec City. It was built by Jean Saint-Germain, an inventor, He had also built a pyramid, a mini-putt, and other novelties. It's now reported to be closed.  The robot, which was controlled by someone I guess in the kitchen, would bring you a tray with the food on it and could talk to you 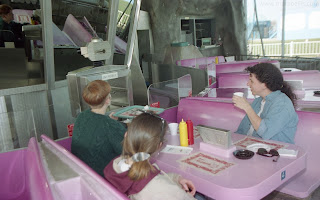