Why is there a cowbell on the desk of the speaker of the Irish parliament? 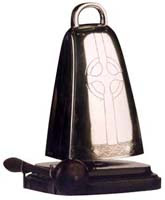 Recently, Paul Gogarty, a Green Party member of the  Dáil, the Irish Republic's parliament, said "F**k You" to fellow member Emmet Stagg.
Lots of commentators thought it was quaint and compared it to James Joyce - it wasn't and bringing up someone's Irishness whenever they behave like a jackass in public is stupid. (Saying 'dat' and 'witdraw' instead of 'that' and 'withdraw' is just an Irish accent, not a sign of feeble mindedness, and doesn't excuse misbehavior!)
I was wondering why there was a cowbell on the speaker's desk - it isn't a cowbell, according to Edward Canavan, spokesperson for the Irish parliament, who said it was the Ceann Comhairles Bell,  a half-size reproduction of a bell that was found at "Castle Island, Lough Lene, Castlepollard, County Westmeath in 1881", and presented to the house in 1931 by the widow of Major Bryan Cooper, a former member.
(Image of Ceann Comhairles Bell taken from homepage of the oireachtas, (Irish Parliament))