1997
It used to be said that freedom of speech was available to anyone who could afford a printing press, but now that computers and photocopiers are available to almost anyone, people are producing and distributing their own personal manifestoes' for living.
'Zines "are pieces of expression for so many people." says Ralph Alfonso, known to just about everybody simply as "Ralph" who reviews 'zines for word magazine of Toronto and in his own self-titled zine and website at www.bongobeat.com.
'Zines and and chapbooks broadly describe self-published works that are usually printed, but can be or include audio, video, computer or even tactile media. A recent issue of Toronto's Glendon McKinney's "King of the Fairies", an Ashley MacIssac (sp?) tribute, was a paper bag with the title written in an icing sugar like substance, and which contained a printed magazine with a photo of an Ashley MacIssac doll pasted on the cover, a cardboard icon with more photos of MacIssac, and a sewn bag with a stick of incence and a candle in it, with instructions for setting up your own altar to Ashley. Chapbooks are one-shot works, while zines are at least intended to be serials.
Ralph, a beat musician and poet living in Vancouver, who has been doing 'zines since the late sixties says that the self-publishing movements' roots go back to the 1800s when small printing presses became available so that people could publish out of their homes, and the word "zine" comes from the "fanzines" that science- fiction buffs mimeographed and shared between themselves in the thirties and fourties. Pop music fans started their own 'zines in the sixties, some of which grew into large-circulation music magazines like Crawdaddy.
'Zines fall into categories of music fanzines, litzines and chapbooks, comic books, activist propaganda sheets, lifestyle and hobbies, and sometimes just the personal statements and viewpoint of the writer(s).
Fanzines are often written by teenagers. The youngest person at Canzine 97, a recent zinefest in Toronto was Miyo Takeda, who finished her first 'zine, Vitamin C, which reviewed local bands like Tristan Psionic, two days short of her 14th birthday.
Girls often do 'zines "because they're more free in expressing themselves and they read more" says Sarah Onyschuk, 15 of Pickering, who writes "minstrel heart", featuring mostly her own poetry.
One of the coolest 'zine in Canada is Poodle, devoted to the game of 5 pin bowling, invented in Toronto around 1908. Poodle is a bowling nickname for a gutter ball. The 'zine deals was started by six artists who regularly bowled at the Commodore, a bowling alley and night club in Vancouver. Rob Elliot, one of Poodle's writers, is in Toronto researching a book on 5 pin, says Poodle's contributors have covered the world visiting bowling allies. One issue contains a brief interview with Japanese band Shonen Knife, shown holding copies of Poodle, and telling about their favorite lanes.
Arouse-O-Rama, a 'zine of 'erotic humour' by Julie Fournier of Toronto, parodies the "just plain silliness" of porn magazine. In one section Fournier appropriates porn pics and then gives them fitting sub-titles. "I tried to run, but the car door blocked me, and she had me by the panties." reads one photo, which features a blonde in a bikini kneeling beside a pickup truck pulling another women's panties down with her teeth.
Fournier's associate, who goes by the name of Ninjalicious, writes Infiltration, for the "Tourist of off-limit areas". Ninjalicious and his friends have snuck into the TTC subway system, the roof of the Roya York, and closed off areas of St. Mike's Hospital., and brought back photos and stories to prove it.
Some zines are political propaganda for oddball causes. 'blood sisters', a women's collective campaigning against the evils of disposible feminine products, which described itself as being "born out of a guerilla girl recyclable pad distribution network', was at Canzine 97, handing out blood red flyers encouraging women to save the environment by using their 'pussy power' sanitary napkins that can be washed and reused.
Zines are mostly circulated in the mail. Most zines themselves contain reviews of others zines, with their addresses, so that zinesters can swap copies of their work. Amanda Kelly is a transgendered 'ziner who tried to set up a distrubution network to try to get 'zines into stores, but wound it down when she found her titles and two others were the only ones out of the 50 she handled that were moving. She produces Tranzine, a news, advice, and activism 'zine for the transgendered, Little Trany Franny, a comic about trangendered characters, and Fish Shticks, a rather innocuous comic about a gold fish. She said she started the 'zine, which she does with a desktop publishing program she bought for $ 19.95, to help other transgendered people and promote society's acceptance of them.
Hal Niedzviecki, editor for broken pencil, a 'zine review published in Toronto. Niedzviecki, who used to work for the literary magazine Blood and Aphorisms, said he left the magaizne to start broken pencil two years ago because he "couldn't get publicity for the emerging zine phenomenon."
Not many book stores will stock 'zines, which are more likely to be found in record shops like Towers on Yonge, The Record Peddlar on Queen, She Said Boom on College, Who's Emma on Nassau and Full Blast on Bloor. Niedzviecki says that most 'zines propagate themselves by mail. Many 'zines contain reviews and addresses, either mail or internet, for other 'zines. 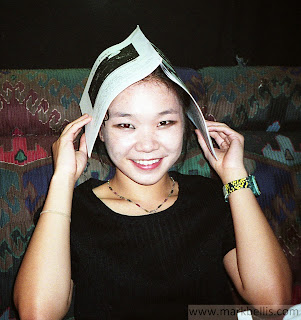 Angela Chu wears her zine 'Love Buzz' as a hat 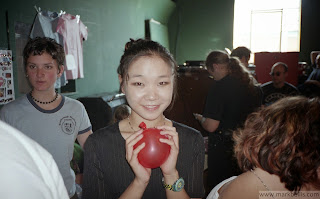 Miss Chu sizes me up for a waterbombing 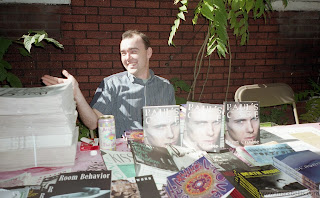 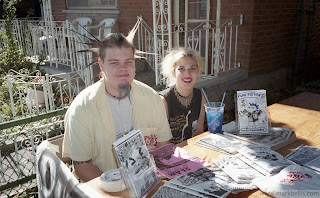 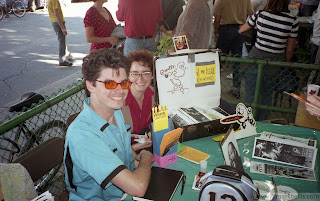 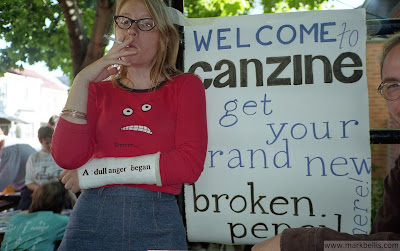 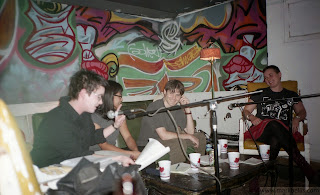 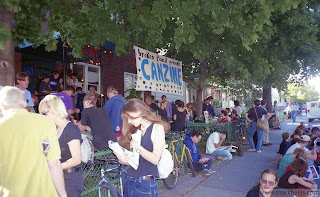 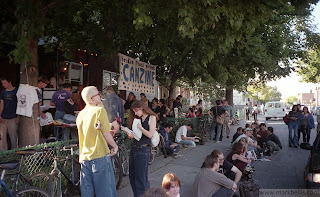