Call in the Bin

Cornwall, Ontario - Caline de Bine is an expression one hears in Quebec and Eastern Ontario, sort of like "Gosh Darn It" - if someone with a French-Canadian accent said "Call in the Bin" it would sound exactly the same. In Cornwall, this phrase is used in English, as well as some of the French-Canadian swear words, like 'tabernacle' and 'sacrifice'. These are only swear words in Cornwall and area English when used with a French intonation - with the English pronunciation they are innocuous. "Caline" can be used by itself for a euphemism for "Calice", as in  the song "Câline de blues" ('Darn blues') by Offenbach."Bine" as used here is just a rhyme word that softens the phrase even more, but bine or binne does mean "bean".  Bin also means the same as it does in English. There are take out food places called "Bineries" that sell baked beans - there is even a Festival de la Bine in Plantagenet, Ontario, organized by the local binerie.   On Twelfth Night, or "Fete du Roi", celebrated twelve days after Christmas, sometimes a bean, or a coin is baked into a cake and whoever get the piece of cake with the bean in it becomes the King or Queen of the party. People who have the family name Lefebvre can pick up the nickname "Beans" (binnez??) because "febvre" (smith, as in blacksmith) sounds like "fève" (bean).
Calice is a quite strong swear word, and should not be used casually. Most French-Canadian swear words use religious objects or persons, unlike French, or even Acadian. You could shout 'calice' in the street in Paris and people would just be puzzled! I wonder if this doesn't come from the Basque and Spanish habit of swearing using phrases involving doing certain bodily functions on holy object or persons. For centuries there were lots of Basque whalers who had established stations in the Gulf of St. Lawrence, even before Jacques Cartier's voyages, and they are supposed to have contributed some words to Canadian languages, like the word 'Iroquois'. It may have been that the full phrase was "I (censored) on the chalice!" and over the years it was modified into just the mention of the holy object.

C and S toke on the beach 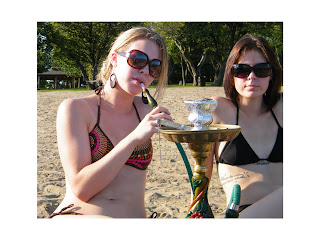 It's a form of compressed tobacco - strawberry flavored in this case. The hookah is called a shisha - up till a few years ago it was only middle easterners who smoked them, but there are trendy clubs nowadays. S started talking to me about the loss of the library of Alexandria, c... hmmm... 300 A.D? which was the lede used by an NPR story talking about how Google wants to be the new library of Alexandria that I heard on the radio about 20 minutes later. Synchronicity? Naaahhh..... common theme and I listen to the news all the time.

C's tat reads "Pursue your dreams to the stars" in English.
Posted by Mark Bellis at 6:10 PM No comments: