With an off-character Chucky doll in back. Driver said he the detailing on his own. "It's my day off!"
Posted by Mark Bellis at 5:33 PM No comments: 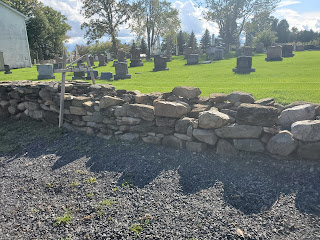 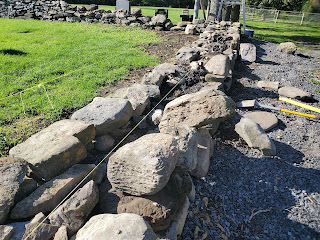 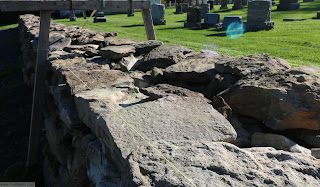 Wall near completion
Dry wall being rebuilt at Salem United Church, Summerstown, Ontario.
Mason Mike Bettany says that the wall had moved over a few feet because a driveway had been built next to it and so the land on the cemetery side of the wall became higher and so pushed the wall over. Also when graves were being dug some large stones weighing several hundred were found in the soil (the glaciers dumped a lot of stones in fields here) and then were piled onto the wall, which did it some damage. A dry wall is made without mortar holding the stones together - here there are two rows of stones on the outside and the middle is filled with smaller stones and gravel. The ropes show how high the wall will be. and levels on the frame, well, keep it level. Bettany is originally from England, and actually knew the village in North Wales where my aunt lived. He said building drywall was "the best job in the world, out in the sunshine, talking to people!" Mike regretted not being able to interest others in taking up his trade.
Cariboo Cameron's wife,  Margaret Sophia Groves, is buried there. She died in 1862 in the Cariboo gold fields of British Columbia, and he had made a vow to bring her body back home - it was an epic voyage by sled from the gold field, by ship and overland through the Isthmus of Panama to bring her back. The legends attached to it were that her body was held by corrupt Tammany Hall officials in New York who would not release her without a bribe, and that her body was preserved in alcohol for the voyage and it was poured out at the grave site, and for many years, grass would not grow there. I don't know whether this happened when she was buried or when she was exhumed in 1873 because of rumours of fowl play.
Posted by Mark Bellis at 10:04 PM No comments: 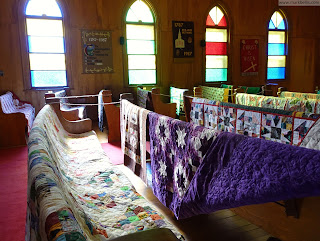 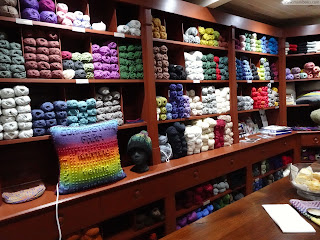 Cornerstone Farm, yarn shop and teaching centre, near Green Valley. The owner said he used to raise sheep and make his own yarn but it become impossible to do this, since local wool mills have shut down and it would take too long to make enough yarn on a spinning wheel. 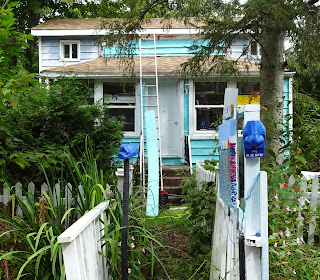 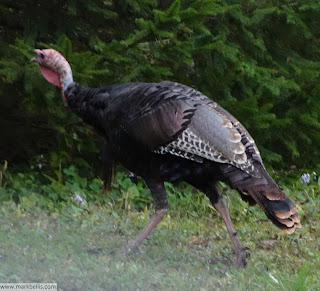 Posted by Mark Bellis at 5:42 PM No comments: 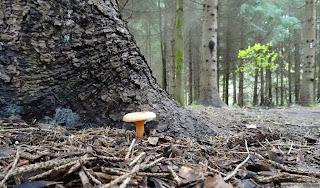 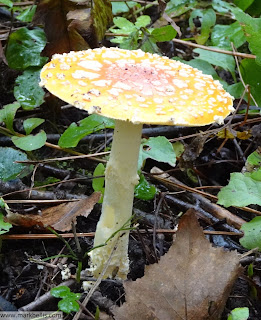 Amanita Muscaria
Posted by Mark Bellis at 10:21 PM No comments:

" The Sea Keeper/Gardien des eaux" is this mural painted on the forward façade of the accommodations block on the bulk carrier CSL St-Laurent by four Montreal artists, Bryan Beyung, and FONKi, Ankh One, and Benny Wilding of the ASHOP art collective. It's a Canada goose in flight. Millions of the geese nest along the St. Lawrence and Great Lakes that this boat sails on. The banner on the side is for the Canada Games torch relay, which CSL sponsors. 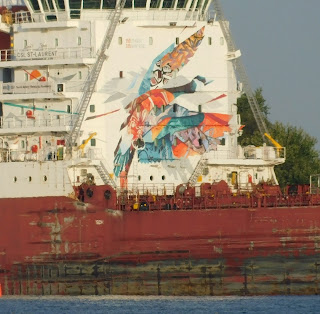